Users of Pangolin’s FB4 laser control interface or a laser projector with an FB4 built in may be familiar with seeing a menu option titled ‘Scanguard’. This article discusses what this feature is, how works, and how it can be used by those interested in understanding more about laser effects safety.

Pangolin’s FB4 interface has been designed for integration directly into a laser projector, offering several features to the user such as DMX, ArtNet, ILDA, and standalone control. One of the lesser documented * features of the FB4 is its scan-fail safeguard feature called ‘Scanguard’. The features of Scanguard are accessible as an option from either the FB4 device directly, by navigating the menus on the FB4’s display, or through selecting the FB4’s settings, when connected to a computer system running the latest versions of Beyond or Quick Show. The sub-menus of this feature allow the user to configure a number of parameters that limit the exposure potential of scanning laser effects, which can, if correctly set up, reduce the likelihood of a laser effect creating an excess exposure.


How do I use the Scanguard feature?

If you have a laser projector capable of meeting the first requirement, and have a good understanding ** of setting up and checking scanning exposure properties, the following notes have been put together to help understand Scanguard’s configuration parameters:

Operation Area
Three parameters are available to set the area over which you want the scan-fail safeguard to be effective. In many installations nowadays, the audience scanning effects are created using dedicated projectors for the effect, while the overhead effects are created using separate higher power projectors. It is however possible to use a single projector to create both audience scanning effects, and define an area overhead, where more hazardous slower moving and momentarily stationary beams are permitted. The parameters that control where these areas are defined are:

Horizon Level (0 to 100, default 50)
Specifies horizontal extent of the protected area within the scan field. The default position is 50%, which means that area below the vertical midpoint of the maximum scanning extent is protected by the scan-fail safeguard, and anything above the imaginary horizontal line can be projected without needed to be concerned about the beam velocity. The Horizon Level is usually set using a test frame, and adjusted to operate a little distance above the audience to achieve a minimum 3m separation distance, as would be the case for any overhead laser effects. This allows effects, static beams, and fingerbeam fans etc., that could otherwise be hazardous, if projected into the audience, to be ignored by the scan-fail safeguard, and permitted to output into the area defined above the audience. 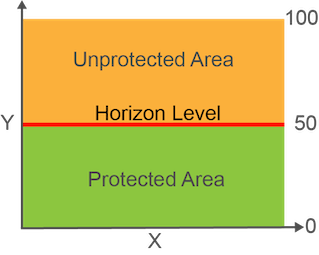 Horizon Angle (-45 to +45, default 0)
The Horizon Angle allows a Horizon Level to be rotated by up to 45 degrees in either direction, which could be useful if the laser projector is not level, being mounted on an angled truss for example.

Invert Y (On/Off, default Off)
This toggle switch simply inverts the behaviour of the scan-fail safeguard on the vertical Y-axis.

Detection Characteristics
Effective protection from excess beam exposure depends upon the characteristics of the laser, its scanning system, and the environment, (e.g. minimum separation distance), that the laser projector is used. Two parameters allow customisation of how the scan-fail safeguard reacts to the scanner output.

Min Velocity (0 – 300)
The minimum velocity that the beam is permitted for output can be adjusted with this parameter. This parameter’s numbers intentionally do not have a specific unit attached to them such as radians per second, or metres per second, because such units would need to be calibrated against the scanner configuration. But the values can instead be used to set the threshold at which you require the beam to extinguish. i.e. when the beam travels too slowly. The threshold is based upon the combined velocity of both the X and Y movements, which still allows single-axis effects such as flat scans to be projected, (where one axis is, in effect, stationary). Starting with a setting of 0, which permits stationary beams, the minimum beam velocity that is permitted for output, increases as larger numbers are specified.

Dwell Time (0 – 999)
This parameter allows the user to specify the time in ms that the laser effect may output at the minimum velocity before shutting the output off.

Rescan Time (0 - 999)
This parameter is not actually related to any scanning output characteristics, but instead refers to the maximum amount of time the FB4 should rescan the network connection, in the case of dropped data on a temperamental network. The number relates to the number of ms (milli-seconds) to use.

Enable Scanguard (On/Off)
A simple toggle switch that allows the FB4’s Scanguard feature to be switched on and off.

The scan-fail safeguard needs to have all its parameters set correctly, which is dependent upon the laser projector characteristics and its usage scenario, before it can be considered as making the effects safer. Using a feature such as Scanguard is just one part of the process creating audience scanning effects that create reliable exposures below the MPE.

As mentioned earlier in the article, to effectively configure the scan-fail safeguard the user needs to have a good understanding of how to set and check exposure levels. This can be achieved using measurement instruments and using test patterns to check effectiveness.

Pangolin’s PASS is still effectively the ‘gold standard’ in scan-fail safeguards, largely due to it having a much greater degree of fault detection and tolerance, where for example, PASS monitors the overall health of the scanning system. Central to the operation of PASS is its analogue fault detection system, which has advantages over microprocessor-based systems in terms of demonstrating reliability. PASS additionally can be configured to monitor the laser output power, and terminate output should a fault develop, with it increasing beyond a predefined limit. The more extensive capabilities of PASS have helped laser projectors fitted with PASS be used in countries that have stricter rules on audience scanning effect use.

While it may look similar in that you can define active areas within the scan field for attenuation to occur, Beam Attenuation Maps (BAMs)are not connected to scanning output and therefore unable to detect fault conditions. BAMs instead just reduce the laser power output control signals when the beam path enters areas of attenuation defined by the map.

* Lesser documented *: the limited documentation, I suspect, is probably due to it not really being possible for a manufacturer of an OEM device to instruct users how to use features that are very much dependent upon how the integrator has implemented the laser projector system components. This is especially so when the feature is something as important as a safety system. I can certainly foresee a situation where if the OEM were to state how a feature works, the information may not be applicable to the end user, being dependent on scanning system the integrator has used.

** Good understanding ** users configuring scan-fail safeguard should have a good understanding of how to determine the applicable MPE, checking exposure levels, and testing the performance of the scan-fail safeguard. Inevitably to do this sufficiently, it requires the use of some test instruments, so that actual values can be measured. These topics are covered as part of the practical exercises in the Audience Scanning for Laser Show Designer’s Workshop