Laser Hazard Distance is an easy to use laser safety calculator that can be used to help determine the safe viewing distance for direct exposure to visible laser beams. The light created by a laser beam is far more concentrated than other forms of light, and if viewed directly can be harmful to eyesight. The energy in a laser beam however becomes less harmful the further along the beam the light travels, eventually reaching a point where the laser risk is low. Laser Hazard Distance can be used to help determine this distance which is known as the Nominal Ocular Hazard Distance or NOHD.

The user enters parameters for the output of laser beam and its natural spread, or Divergence. Laser Hazard Distance then reports the distance (in metres and feet) that the NOHD occurs. It also reports the spot size the laser beam expands to at this point. The laser safety software uses exposure limit data from the two internationally accepted laser safety standards, IEC 60825-1:2007 and ANSI Z136.1-2007, to calculate the hazard distance for a 0.25s accidental exposure to a visible laser beam (400nm to 700nm). Screen shots of the App can be seen at the bottom of this page.

What can Laser Hazard Distance tell me?

The power density of a laser beam decreases the further the beam travels from the originating source. Most laser beams are harmful if viewed directly, but even the more powerful lasers produce beams that will at a certain distance reach a point where the power density has reduced to a level that is equal to the exposure limit. The distance from the laser at which this occurs is known as the Hazard Distance, or Nominal Ocular Hazard Distance (NOHD), to give it its full name.

The NOHD that Laser Hazard Distance calculates is for direct eye exposure to a visible laser beam (400nm to 700nm) for 0.25 of second.

The other parameter that Laser Hazard Distance reports is the diameter of the laser beam at NOHD. Among other things, knowing the spot size at this distance can act a sanity check to see if the laser beam has behaved and expanded as predicted by the divergence value that you have entered. 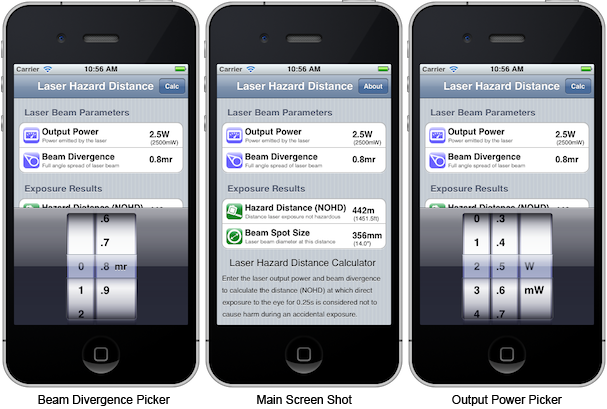 Important Safety Note:
Direct exposure to laser light can be harmful to eyesight and normally care should be taken to avoid doing so, especially if the user has little experience in assessing the risk. Laser hazard distance App is provided as tool to aid those competent in assessing laser exposure risk, and should be used alongside other assessment methodologies, not as a substitute.