In recent months Italian luminaire manufacturer Claypaky have been promoting their ‘Laser Revolution in Beam Moving Lights’, with a fixture called the XTYLOS. The luminaire is claimed to used a tailor-made laser source, that is described as being enclosed in a safe and fully sealed module. So what does this mean for user safety? 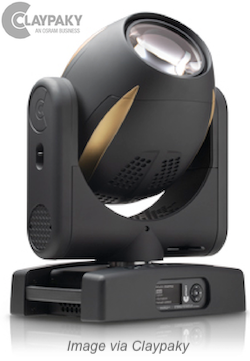 The 2014 edition of the laser product safety standard does in fact include an exemption for laser products, (except toys), designed to function as conventional lamps, if at 200mm from the source the angular subtense is greater than 5 mrad, and the peak radiance is below a defined level. In such cases, the laser product can be evaluated and classified under the Photobiological Safety of Lamps and Lamp Systems standard IEC 62471:2006. There are an increasing number of products that use lasers that are being classified under this criteria. Popular examples include Laser Illuminated Laser Projectors, and high end Vehicle Headlamps. Both these products employ lasers to illuminate a phosphor material, internally within the product, so that the light emitted by the device is that of the excited phosphor rather than the initial laser source. This causes the emerging beam of light to be far less hazardous than that of a traditional low-divergence laser beam.

The specification for the XTYLOS quotes a normal beam spread of 2 degrees, or 0.5 degrees in reduced aperture mode. These figures translate to 35 mrad and 9 mrad respectively, which are hardly laser-like in a traditional sense, where users expect to see beam spread figures around 1 mrad.

Claypaky do state that the product has been classified under the IEC 62471:2006 lamp standard, quoting a Risk Group 3 classification, meaning that the luminaire may pose a hazard even for brief or momentary exposure. You can read more about how the lamp standard applies to theatrical luminaires in a previous post "Lighting Product Risk Groups". Because of this, the manufacturer is supposed to supply details of the safe viewing distance. Claypaky says on their webpage that this information is included in the user manual.

We’ve now seen the test reports for the XTYLOS and can confirm what was thought to be the case outlined above, is correct. It is a laser illuminated luminaire, that satisfies the subclause 4.4 in Edition 3 of the IEC 60825-1 Laser Product Safety Standard. This means the XTYLOS can be instead classified under the IEC 62471:2006 ‘lamp standard’.

Therefore, using the XTYLOS luminaire is not subject to the same precautions needed when traditional laser lighting effects. The XTYLOS, is not entirely hazard free, having be classified as being Risk Group 3 under the lamp standard. But the same can probably be said of many traditional stage luminaire effects, meaning a degree of care during use is needed. But essentially, it can be used just like any other high-brightness stage lighting effect.