The Laser Show Safety element of the Laser Safety app is an essential tool for anyone wanting to estimate the exposure level present in a wide range of laser effects created by the majority of laser systems. The Laser Hazard Checker calculates the exposure level created by a laser effect, and compares it against the appropriate safety limit value, reporting if it is above or below limit. 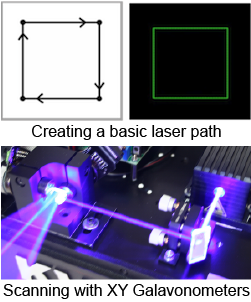 Most laser projectors create their laser effects by quickly moving or ‘scanning’ a laser beam in a repetitive fashion, creating the illusion of solid geometric shapes in midair. Lower cost laser projectors will normally achieve this using a mirror mounted on two stepper motors that are then controlled either via DMX or a sound-to-light function. The mirrors are moved quickly to create the illusion of a simple shape, such as a tunnel, or flat-scan etc. More sophisticated laser projectors also employ the same technique, moving a single beam of light to trace out the path of the laser effect; the main difference being that these projectors can offer more precision in movement of the beam, and, of course, use beams of much greater power to achieve greater output brightness. Such laser projectors are normally connected via a standard ILDA connector to a control system such as a Pangolin.

What exposure times need to be considered for laser effects?

We have seen that most laser effects are created by rapidly moving a beam through midair, using some form of mirror deflection system. If a laser show system is being used to scan an audience, (‘audience scanning’ or ‘crowd scanning’), the exposure duration is considered to be the time it takes a scanning beam to move over the pupil of a person’s eye. The laser safety standards quote standard pupil diameter as being 7mm across. So in essence, the duration we are concerned with knowing is the time it takes a laser beam to travel a distance of 7mm in the audience area.

A simplified diagram to show how only a small part of the laser effect enters the human eye as it crosses the pupil: 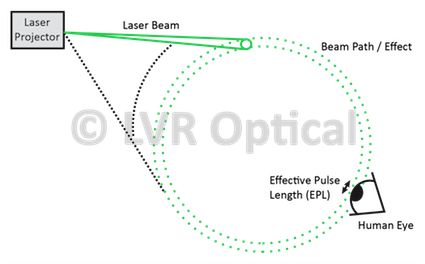 The most thorough way of determining this is through measurement using a fast silicon detector and meter. When you know the time it takes a laser beam to cross they eye, you can use the Laser Hazard Check to compare the exposure against the appropriate exposure limit. However, if you do not have access to the meter, it is still possible to use the app to gain an understanding of the exposure conditions. By knowing the type of laser effect, it is possible to achieve a good estimation of the laser exposure level, by selecting the type of laser effect and its corresponding exposure time from the ‘Duration’ parameter of the Laser Hazard Checker. Different types of laser effects create varying exposure duration as the beam crosses the eye. This is due to the varying speed at which the beam travels as the effect is created. Finger beam type effects (fans, tunnels etc, with emphasised visible beams), actually pause beam movement momentarily to make the laser beam stand out. These short pauses in beam movement, often lead to exposure conditions of 1ms. Faster scanning effects such as smooth flat scans or tunnels, tend to move the laser beam at a much greater rate, resulting in much shorter exposure durations, in the order of tens of millionths of a second.

If you are unsure of the exposure conditions you should select a duration that errs on the side of caution, such as 0.25s or several ms, that would represent a ‘spiky’ emphasised laser beam effect.

Important Safety Note:
Direct exposure to laser light can be harmful to eyesight and normally care should be taken to avoid doing so, especially if the user has little experience in assessing the risk. Laser Show Safety App is provided as tool to aid those competent in assessing laser exposure risk, and should be used alongside other assessment methodologies, not as a substitute.